We Barrel-y Know What We’re Doing But who does, right? Regardless, we’ve been working hard and learning along the way as we
navigate the tumultuous and quickly changing world of craft beer. The ethos of onward &
upward is especially evident in our blossoming barrel-aging program.

Starting in December 2018 with an Imperial Oatmeal Stout, lovingly known (at least by
those in the know) as Two Man Job, being laid down to rest in 7 freshly dumped Heaven Hill
barrels. 11 months later, those barrels were emptied and blended before being conditioned on
graham crackers, cocoa nibs, and Madagascar vanilla beans and on November 9th, 2019,
S’mores Job was released on the 2nd Anniversary of Fifth Ward opening the doors. A year later,
we upped the ante and released 12 different barrel-aged beers; 10 Stout variants, a Rye Barrel
Scotch Ale, and a Barrel-Aged Barleywine.

Right around mid-2020, we had refined our high-gravity brewing process and recipes
and were able to produce clean stouts and barleywines upwards of 13%-14%ABV before they
ever touched oak barrels. The resulting 5 recipes have been the basis of our current barrel-aging program. It includes 3 stouts (Imperial Oatmeal, Russian Imperial, Imperial Maple), 1
Barleywine, and 1 Wheatwine. Roughly 1-3 batches of any combinations of those recipes will be
brewed within a given quarter. The result is a well-rounded stock of barrels that can be sampled
and blended, allowing Fifth Ward Brewing much more control over the finished product.

How much control you might ask? There are a few things we can do to easily, like
regulate barrel temperature, sanitation, the initial recipe, length of aging, and barrel choice. But
beyond those physical parameters, nearly all the control is in the final blending process. This is
where science and art are blurred.

Fifth Ward Brewing has released two beers thus far through our fledgling program. These were the
Pulling Threads Stout and Big Willy Style Barleywine, released during our 4th Anniversary
celebration in November of 2021. To develop these blends, we lined up the nearly 50 barrels
that our program was composed of at the time. We pulled a sample from each barrel and quickly
labeled it and set it aside, moving on to the next barrel in an orderly fashion. Once samples
were pulled from all barrels, it was on to tasting.

Going into this tasting session, we knew the result would be one stout and one
barleywine. We worked through the samples starting with the stouts and identified a barrel we
particularly liked and worked off that flavor profile. This happened to be an Elijah Craig barrel
filled with Two Man Job that had been aging about 11 months. Working through the rest of the
barrels and choosing for both complementary flavor profile and Specific Gravity (the measure
of remaining sugar/sweetness in the beer), we ended on a blend of 3 barrels of Two Man Job, 2
Barrels of Russian Job (Russian Imperial Stout), and 1 Morning Job (Maple Stout). The same
process was repeated for the barleywine from a line up of 14 barrels of barleywine which were
2 batches of the same recipe, one having a sweeter profile, and the other having a drier profile.

The results of these blends both came back from testing at above 15.5% ABV and are
examples of some of the best tasting and most balanced beers we’ve ever put into the world.
As time goes on, our stock of barrels to choose from will only grow larger both in volume, and
range of age, allowing us an even larger stock of interesting and delicious flavor components to
work with. It’s the undiscovered flavors in those barrels that we have yet to uncover that keeps
us giddy about this project, and we hope you’re excited too. 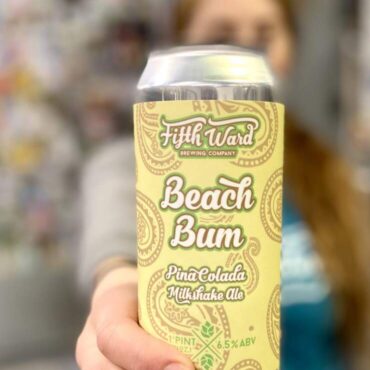